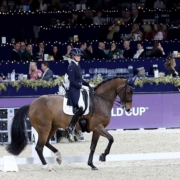 CDIW Basel, Switzerland took place from 12 to 15 January. Jorinde rode Charmer in the Grand Prix with a score of 69.109%. In the freestyle they achieved a score of 73.510%, including a 7.3 for her pirouette.
Jorinde about CDIW Basel: “Basel is a great match. It is an exciting arena for Charmer, at the moment he is one of the youngest horses in the field of participants, but he is getting more and more confidence in those big exciting arenas. That gives me a very positive feeling for the future!”
https://www.dressuurstalverwimp.be/wp-content/uploads/2023/01/WhatsApp-Image-2023-01-16-at-11.59.57.jpeg 938 871 Newmore https://dressuurstalverwimp.be/wp-content/uploads/2020/04/Retina-logo-verwimp.png Newmore2023-01-16 12:01:462023-01-16 12:02:56Jorinde and Charmer in action during World Cup competition in Basel 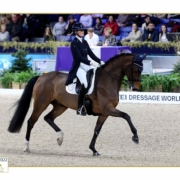 As a nice end to the year, Jumping Mechelen is traditionally organized from 26 to 30 December. Also this year Jorinde started during this beautiful World Cup competition. She rode Charmer in the GP and Goldy vd Kempenhoeve in the Prix St George and she participated in the show class: Masked Riders.

With Charmer she scored 67.043% in the Grand Prix. On Thursday they rode Grand Prix Freestyle to Music and obtained a score of 73.170% after a small misunderstanding with the jury.

With Golddream vd Kempenhoeve she rode the Prix St George to a score of 67.853%. On Thursday she rode the Intermediair Freestyle to Music and achieved a nice score of 73.055%, placing her in third place.

Jorinde’s student Ruut Pasgang started with her 8-year-old James Pleasure in the Prix St Georges and achieved 64.853%. In the Freestyle to Music the duo scored 66.705%. This was James’ first big competition so he was still a little impressed with his surroundings.

CDN Turnhout took place last weekend. Jorinde had a very creditable weekend where she was on the podium several times. She took first place with Golddream v/d Kempenhoeve with a score of 72.5% in the Intermediaire 1, with River Rise Benetton she scored 67.5% in this test. With Ampere s Diamond v/h Klaverhof she came first with a score of 72.059% in the Prix St Georges. And finally she started with Rose Belle in Level 4.3 and got a 2nd place with 70%. 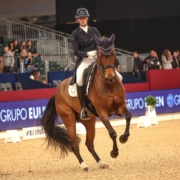 Charmer and Jorinde are in good shape and can look back on a successful weekend during the world cup competition of the Madrid Horse Week. During the Grand Prix the combination became 10th with a score of 68.457%. In the freestyle they achieved a neat 9th place with a score of 74.450%, which also means a new personal record for Jorinde and Charmer. 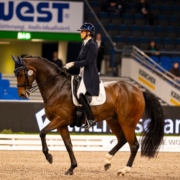 On Saturday she rode the freestyle to music and achieved a personal best with the bay gelding 74.2%. Jorinde: “I am very proud of how Charmer behaved in this great arena. Unfortunately we had some mistakes in the tests, but we achieved a personal result and I am very happy with that!” 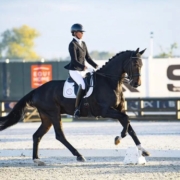 On Sunday 6 November Jorinde started Just a Little Bit Krack v/h Klaverhof (by Tango) and Escobar (by Serano Gold) in the Prix St Georges. Not entirely without merit as she took both first and second place. With Just a Little Bit Krack v/h Klaverhof she was unanimously put at number 1 by the jury with a nice total score of 70.662%. With Escobar, one jury put her in fourth place, but she still achieved a nice second place with 67.795%.

Anna Peeters won the pony team test with Balotelli during CDN Dentergem with 71.7%. With Harlekin she won both junior classes. 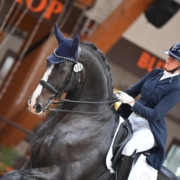 Last weekend CDI Le Mans was held. Jorinde took River Rise Benneton and Ampere’s Diamond. For River Rise Benneton, this was his very first competition abroad. In the PSG they achieved a decent score of 69%. Unfortunately in the Inter 1 they had too many mistakes and they were unable to secure a place in the freestyle.

Ampere’s Diamond ran two clean tests with 68 & 67%. Unfortunately there was some tension in the freestyle and they scored 69.3%.

Jorinde: “Unfortunately last weekend I had just too many mistakes with River Rise Benneton and with Ampere’s Diamond some tension in the freestyle, but overall I had a good feeling with both horses. On to the next event!”

Pupils Ruut Pasgang, Elise Verwimp and Angelina Hermans also participated in Le Mans. Ruut and James Pleasure achieved a nice second place in the freestyle with 73.375%. Elise and Delyse van het Bergenhof placed 4th twice in the Children. Angelina Hermans and Valerion finished in a nice 3rd place with 72.700% in the freestyle on Sunday with the ponies. Earlier this weekend she became 2nd and 3rd.

Last Saturday Jorinde won Level 4.3 with Rose Belle v. Johnson during CDN Turnhout. With a nice score of 71.667% she was just ahead of Eline Borrey De Coninck with Dollars v. Destano, her father’s student. Eline and Dollars achieved a decent score of 71.213%, which was good for a second place. Ruut Pasgang and Breitling van Hofter Wilde v. Bretton Woods also participated in this test. She finished in sixth place with 68.106%. 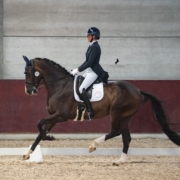 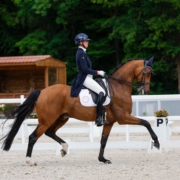 The battle for the Belgian Cup was on the program from 19 to 21 August. Jorinde started on Friday with River Rise Benetton in the PSG where she drove to a score of 70.147% and they went even further in the freestyle with a score of 71.917%. This resulted in the overall classification for Jorinde in 1st place, and thereby wins the Belgian Cup in the PSG class!

With New Berry Z there was some tension in the first test but recovered in the second test which resulted in 70.009%. This resulted in a 5th place in the final standings!

On Saturday Jorinde rode with Charmer 70.181% in the Grand Prix, which gave them a 3rd place in the intermediate classification.

On the last day Jorinde rode the freestyle with Charmer where she achieved a decent score of 74.125%. This score placed Jorinde in 2nd place with Charmer in the final standings of the Grand Prix.