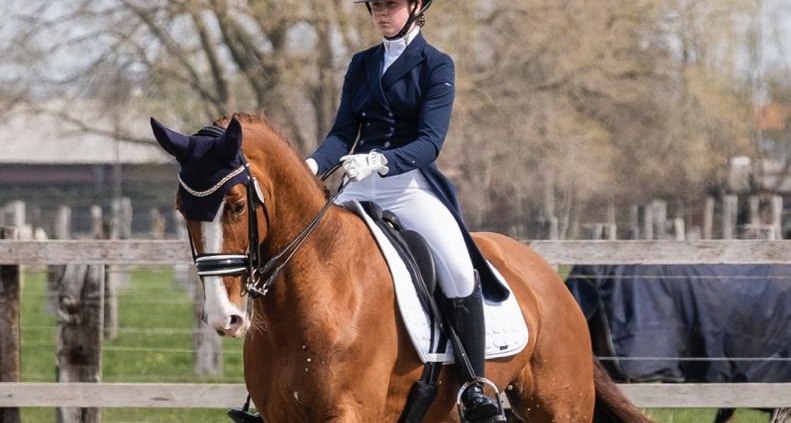 Team Verwimp was present at CDN Weelde last weekend. Jorinde presented the horse Grace in the Prix St. Georges and wrote the victory to her name. Pupils Elise Verwimp and Louise Brauwers also rode neat tests and achieved good scores in the Children and Juniors. Read the results below.

Yesterday Jorinde was at a competition with the mare Grace. She is owned by Emma Driessen, but Jorinde took the test this weekend due to the exam period of the ambitious rider. She presented Grace in the Prix St. Georges and won this class convincingly with a percentage of 70.2%.

Elise Verwimp presented her horse Boemerang in the Children class. She rode two neat tests, where she unfortunately made a mistake in the trot of the first test. Her horse Boemerang jumped into gallop too early. Despite some lost points, Elise still achieved a neat percentage of 69% in the team test. In the Individual test she rode a beautiful test without mistakes, resulting in a nice score of 73%.

Pupil Louise Brauwers rode with her horse Esprit in the Juniors at CDN Weelde. The golden combination rode a good Junior team test, which was appreciated by the jury with 68%. With the achieved results, there is enough motivation for team Verwimp to prepare the horses for the next competition!

A dream debut for Jorinde and Charmer in Le Mans!
Scroll to top